Historically, carpets play a significant role in forming Azerbaijan’s heritage and aesthetics. Different carpet schools share the same ornamental forms, such as geometric patterns, floral motifs, and calligraphic shapes, but some of the combinations are specific to certain regions. Today, the word ‘pattern’ is often associated with machine algorithms that recognize regularities in data. Orkhan designed an AI algorithm to analyze carpet designs and traditional ornaments. After processing the collected data, the neural network system is producing imaginary patterns that could have been Azerbaijani or similar, but all of them never really existed. The installation The Idea of Saving Aesthetics explores data as a fruitful and yet thoroughly problematic resource for artistic inspiration in the turbulent epoch of global nomadism, uneven cultural diffusion, and rising nationalist movements.

According to historic data and memo records of European researchers and travelers, Mediaeval Azerbaijan was one of the major carpet hubs of the Orient, and after the Islamic Golden age, most of the middle eastern carpet patterns and ornaments became popularized by the western countries. While in Azerbaijan, carpet weaving was primarily a dominating form of art, with the traditions and skills carefully passed over from one generation to another, through developing and improving methods of making and spreading crafted symbols. By approaching these representations of our nation’s cultural history, with the help of AI, we get a dialogue between the future and the past, dystopian and utopian.Í

In this exhibition, the artist highlights the source and meaning of ornaments with the background history and regional source of them. During the exhibition experience, visitors will be able to witness current locations and uses of the embroideries all over the world.

Premiered in Moscow International Contemporary Art Biennale 2019.
This art installation has been in the collection of Russian Federation The State Tretyakov Gallery since 2020. 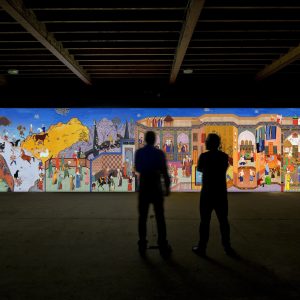 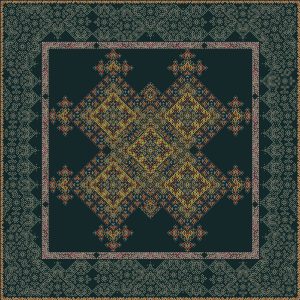