GAZELL.iO is pleased to present a solo presentation and NFT drop of trailblazing Azerbaijani digital artist Orkhan Mammadov (Booth X-15). The exhibition and NFT drop, Singularity in Heritage, derives from his ongoing research project and autonomous AI art, first shown at the Venice Contemporary Art Biennale in 2019 and the Moscow International Art Biennale. This NFT drop consists of a series of video works and stills, resulting from an AI algorithm designed by the artist to understand and find similarities between carpet designs and traditional ornaments. After processing over 150,000 archival images of carpets, rugs, kilims, miniature paintings, and ornamental patterns found in museums and libraries worldwide, a neural network computing system brings together the heritage through a digital lens, enabling the viewer to encounter the visual history of traditional carpets. Mammadov revives a “tangible” cultural heritage and turns it into the first-ever carpets and Middle-Eastern-inspired wall designs in the Metaverse.

The NFT drop collection comprises of 333 unique NFTs split into 3 different collections of that Mammadov has explored throughout his artistic career; carpets, Persian miniatures, and oriental patterns all dating Pre-Islam. Within each category there is a range of videos and still images available at a variety of prices from .1 ETH for the still images, to 5ETH for the full 3 minute, 4k resolution NFTs in an attempt to make the series available to a breadth of collectors. The drop will be live from the 9th of March. The NFTs will be on physical display available for the public to view at Art Dubai Digital from March 11th- 13th and the World of Web3 summit, located at Burj Park Dubai, from the 13th-16th March.

Orkhan Mammadov’s  practice focuses on the representation of Eastern culture through innovative art-making methods. Born and raised in Azerbaijan’s culturally rich Ganja city which gifted to the world poets such as Mahsati and Nizami Ganjavi, Orkhan was interested in the idea of preserving and regenerating history, society, and national identity through creating AI generated art. Through strong research-based practice, Orkhan’s works undeniably display the significance of the traditions and history, to understanding and caring for the legacy of tangible and intangible heritage from the Middle East and ancient Persia. Internationally, he is recognised by his striking visuals and interactive installation, such as in the recent series of AI-generated work Repetition (2018-present), which explored the alienation and escapism felt by a disaffected and displaced culture that cast itself as a fictional but physical element. The interplay between virtual and real worlds, utopia and dystopia, and the past and the present would remain major themes for Mammadov, as his cultural commentary remains a consistent focus. Orkhan concentrates on the intricacies of Middle Eastern patterns and kilim motifs, rather than popularised common leitmotifs, as he sees the visual culture of the middle east as an emblem of the diverse cultural wealth from the ancient history of the Middle East.

Orkhan emerged into the NFT community unlike many artists, rather than focusing on the possibilities of technology and the future, Orkhan interrogates the beauty of the tangible past. In Singularity in Heritage, Orkhan continues his journey to document and preserve vast cultural history and tradition of the NFT future. As a result, Mammadov pushes the boundaries of tradition and digital, questioning technology’s role as a form of memory and a tool of power. 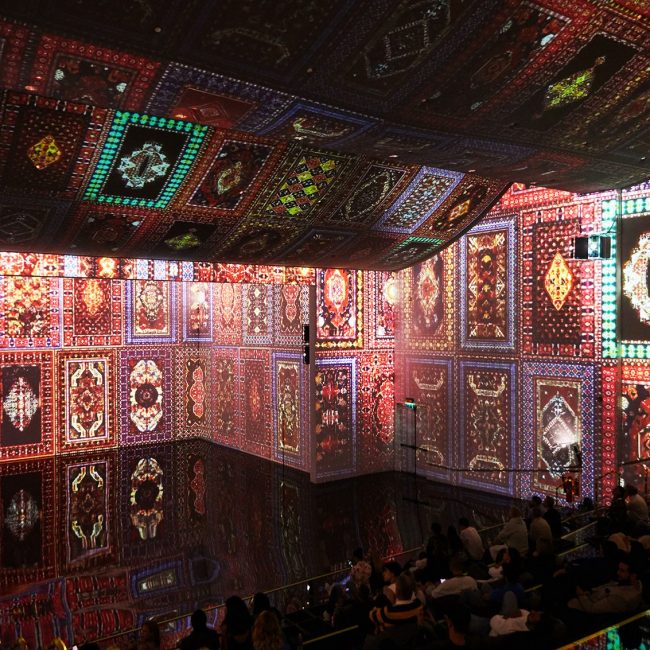